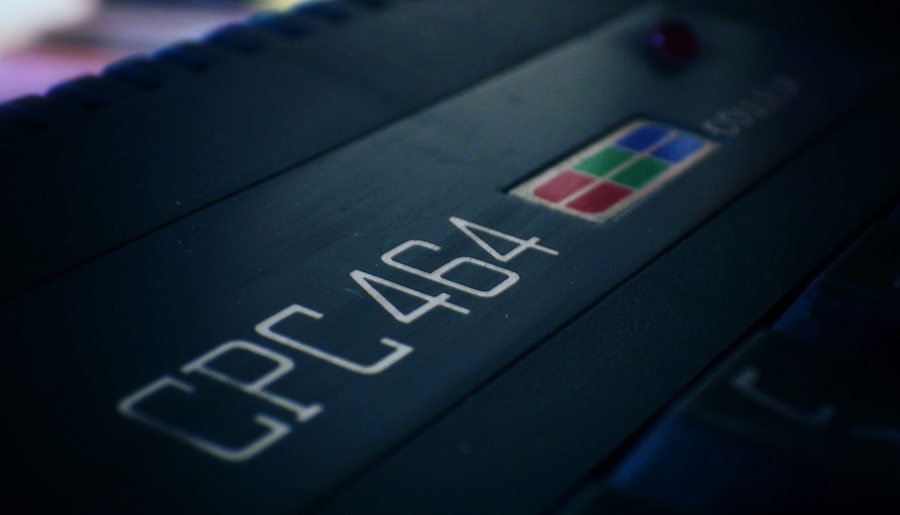 When I was an 8 year old boy, in the beginning of December 1984, close to my house opened a computer shop. I remember myself going every day out of the shop’s showcase to admire the monitor of an Amstrad 464 creating alternations with coloured lines on the screen, only using a simple mathematical algorithm.

A few days later my father asked me what I wanted as a Christmas gift. I took him by the hand to the shop’s showcase and showed him the computer. “That’s what I want!”.In the beginning, my father tried to convince me that a bike or another toy would a have been more interesting to me. I insisted on my choice, so on Christmas Eve a big box with a beautiful Amstrad 464 with a cassette tape and green monitor was waiting for me in the living room.

I unboxed the computer with great joy, placed it on the living-room table and started browsing within the english manual with the commands and the instructions of use. Of course I didn’t speak nor read english and had any idea about programming languages.

Only a few days later, right before New Year’s Eve, I wore my best clothes and went to the shop where we had bought the computer with a cassette in one hand. I kindly asked the shop assistant to put the cassette in the showcase computer to play. He did not spoil my wish and after a while the monitor screen showed a christmas tree with lamps changing colours. That was my first computer program ever.

From that day until the holidays were over I would stand outside the showcase for hours  admiring my creation running on the store’s Amstrad CPC6128.

My occupation with computers became daily, to the point that school lessons seemed boring to me. I would finish my homework as fast as I could, to be able to spend more time on the computer. I slowly got to know other children who had also acquired a computer.

When other children were fighting about football matches, I remember the “Homeric quarrels” among Amstrad and Commodore fans.

With these children we still remain good friends. Most of us have followed a career based on the computers.

As Confucius said: “If you do the work you like, you will not have to work one day in your life.” So, even though I’ve been making the keyboard an extension of my hand since my eight years, I never considered it a job.

Although I have not been unemployed one day in my life so far, I believe I haven’t work for a single day. I have managed to do my hobby as a profession, doing something I love every day.

On my freshman year in Junior High School, I found my first company called “Laser Soft” with a friend and classmate. We had started a business in which we sold copies of cassettes and floppy discs with games for Amstrad computers.

Our clientele grew daily and under the desks you could see our photocopied multi-page lists of the games available.

During the breaks we were something like drug dealers. The other children would approach us in a conspiratorial manner and ask if we had a certain game. We had or could have, almost everything! The next day at the break we quickly exchanged money with the “product” on a floppy disk.

“Doing a job without advertising it is like closing the eye on a girl in the dark”. With that quote in mind one day I went to a printing house and said: “Hello, I want to print my own business cards!”. The owner looked at me in a serious tone and told me: “Sure! What would you like me to write over?”. I gave him a piece of paper with the information I wanted him to print. He looked at the paper, looked at me and said: “Come in two days to get your cards.”

Two days later I went back to get the cards and asked how much they cost. He took his serious tone again and told me: “I will not take any money from you, because I believe you have a lot to give when you grow up, young man.” He said “Goodbye” and I left.

On my first year in High School I developed my first computer program. It was a management program for rented cars and motorcycles. There was no equivalent program in the market at the time, even though the island of Rhodes hosted more than 300  businesses of that type. The selling price was set at 100,000 drachmas (about 300 euros) and in less than a year I managed to do over 120 installations.

The success of the application was spread from mouth to mouth and that’s how I ended up with 14-15 million drachmas (about 45.000 euros) in my pocket at the age of 15.

My father was a building contractor. I remember him leaving for work at 7 a. m. and coming back at home at 5 p.m. covered with cement and lime. He passed away a few years ago. He never got to understand what I do for a living. “He works with a computer”, that’s what he answered whenever they asked him what I do for a living.

Suddenly, I was making more money than him! Panic prevailed at home! How I got all that money, how I spent it etc. These and a lot more questions emerged  and became a matter of controversy with my mother for a long period of time.

“The kid is in big trouble!” How could the accept that the kid made all that money with that “contraption”.

One day they decided that this money was a lot to be managed by a child of my age. At the same time, there was no way they could get it from me. So, every week my father asked for money to cover his professional obligations. The money turned back to me gradually and controlled. To solve any possible queries, my parents didn’t steal my money. They turned them back to me in their entirety.

At this age, I invested in my first PC. It was a made in Greece device called “IKAROS”. I still remember its typical monochrome blue screen and the modem that could carry 1200 characters per second!

During my second year in High School, it came to my attention that OTE (Hellenic Telecommunications Organisation) wanted to bring out a CD with directory information. Once more I put on my best clothes and headed to the local OTE store. I asked for the manager, introduced myself and told him what I had heard. I asked if I could have an OTE subscription database to create my own search program. He looked at me with a smiling face and told me: “Come back a few days later and we’ll see what we can do.”.

A few days later there I was again at the store. I left with a CD in my hand. There were all the OTE subscribers of the Dodecanese on an electronic list. Surname, name, address, phone and profession for businesses. My only obligation was to get the result of my work for evaluation back to OTE. The program I had created was “Infotel”.

Along with me, OTE at central level was creating a CD with the subscribers from all over Greece. “Eat my dust”, the say. The search for a simple name needed a few minutes to give results, while mine needed only a few seconds to do the very same job. Although they tried from the local store to promote my product in the headquarters, we hit a wall.

It didn’t let me down! I asked permission from OTE’s store to use my product locally and took it. “How could a child do business at this age?”, I guess they asked themselves.

“Infotel” was sold for 10,000 drachmas per CD (about 30 euros), to hundreds of people and businesses on the island. It was used by courier, commercial enterprises, hotels and call centers. For a while, the island’s police headquarters used it to search for phones quickly.

It became a bestseller on the island! The project made loads of money, but I could progress it even more. “Why not make it print labels, as well!”, I thought as passing by the office of a political candidate during an election period.

I stepped into the office, asked for the office manager and described him all the abilities of my program. The deal was closed and we shook hands! 15.000 parcels with names printed on them, due within a week for 500.000 drachmas (about 1.500 euros). And that was a hell of a money at the time!

At home for a week you could only hear the annoying noise of the printer working hard. The noise would stop only at night. A week later, I handed out the first 15,000 envelopes in a box. Triumph!

The service became viral and so I passed through all the polling stations and distributed files. My “good fame” remained for the next 2-3 elections.

In every election match, the printers were on fire and of course my pocket was getting fuller and fuller. It emptied shortly after that as with the prepayment my grandfather gave me along with the money I had raised, I bought my first GLX motorcycle.

The biggest local newspaper has never been out of our home. Our neighbor made the distribution for the newspaper and so he obtained a copy for each apartment of our block of flats, upon his return from work. For many years I remember myself returning from school, lifting the newspaper from our paddle and entering home.

One day, as I was reading the newspaper, I saw an ad from a company looking for a computer programer. The company was close to my neighborhood, so for once more I put on my best clothes and went there to apply for the job.

“Hello, I came here to apply for the job you are offering!”, I said to the two company owners. Initially they thought I was mocking them. “Have a seat and show us what you can do. How long have you been programing?  Sit down on this computer and write a routine to do that! “.

They kindly explained to me then that they could not hire me because I was too young, but I kept good relations with them. In one of my many visits to the company, came to me the idea of developing a cash register simulation program.

I left with the idea stuck to my mind, I worked on the application and a few days later I went back with the program in hand. “That’s what I did, check if it works for you!”. The program worked in all the nightclubs of a major night club businessman all over Greece.

That was another “best seller” in my portfolio and at the age of 16-18 years old I had a  gold membership card and free entrance to all the fancy nightclubs of the time.

The years have passed and I have done many small and big projects so far, like the ones mentioned above. I worked with most of the IT companies on the island and worked for many of them in Rhodes as well as in Athens.

In 2004 I made the final decision that I did not want to work again as an employee, and so I created my own business, which I maintain until today. My mind, of course, never ceased to be in constant search for the next “great idea”.

Many years, the days before Christmas Holidays arrived, I decided what I wanted to become in my life. My parents helped me make it happen and they were not an obstacle to it. It was probably the best Christmas gift they ever did to me, even though they did not know that back then!

“When men are rightly occupied, their amusement grows out of their work as the colour-petals out of a fruitful flower.” ~ John Ruskin